These charts will help you determine the âmodel yearâ of your pre-1980 Volkswagen, and usually - but not always - when it was built. 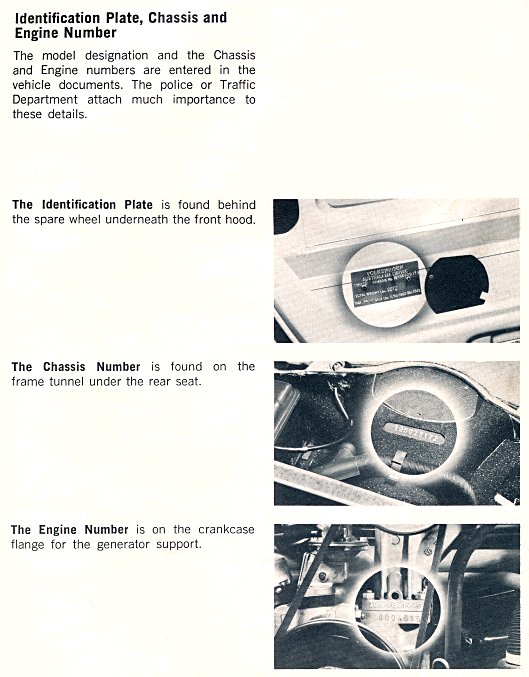 Originally the VW âmodel yearâ ran from 1 January to 31 December. On 31 July 1957 the Volkswagenwerk changed to the 1958 model year for Beetles, which meant that the new model year begins when the factory returned from the summer holidays. This also matched US practice. The Karmann Ghia and Transporter also moved to this arrangement the following year. The German factory has used the 1 August to 31 July model year to the present day.

From 1954 to 1959 Australian Volkswagens were assembled from German CKD parts. The components were made according to the German model year, but completion in Melbourne could often be up to six months later, due to the shipping time for the CKD crates to arrive in Melbourne, be railed to Clayton and unpacked, prepared, assembled and finished (joining with the various Australian-made components such as tyres, batteries, glass, paint, upholstery etc).

Full local manufacture ran from 1960 to 1968. The Australian factory did not use the German August-July production year. The Australian production year began in January or February, after the workers returned from their Xmas summer holidays, although this varied â the 1962 model year, for example, was delayed until July 1962 and was released as a â1962Â½â model that carried into early 1963. Therefore while the chassis number of Australian models will indicate the German-style âmodel yearâ, they do not necessarily correspond with when the vehicle actually left the production line.

After 1968 all Australian VWs returned to German CKD assembly. Again the Australian factory was 3 to 6 months behind the German factory. The Beetle ended local assembly in July 1976, and all remaining Australian VW assembly (Transporter, Golf, Passat) ended in March 1977 when Nissan took over the Melbourne factory. All subsequent VW models have been fully imported.

All Volkswagens made after 1 August 1979 (that is, 1980 models onwards) use the Standardised International Vehicle Identification Numbering (VIN) system. Consult the VIN page for information on post-1980 Volkswagens.

VW Type 1 chassis numbers are located on the frame tunnel, underneath the rear seat. VW Beetles were not sold in Australia until 1954. Australian CKD assembled (1954-59, 1968-76) lag up to 6 months behind German-built models. Australian manufacture production year (1960-67) is generally February-January but can vary. From 1965, Beetle Cabriolets had a 15* prefix (these were not sold in Australia). Australian-manufactured Beetles from 1965-67 had a 19* prefix, indicating they were stamped in Clayton, but this practice was discontinued in 1968 when German CKD kit assembly resumed. The Australian-manufactured Country Buggy had a 1182* prefix (some 1183* cars may exist too).

VW Type 13 chassis numbers are located on the frame tunnel, underneath the rear seat. These models were called the Superbug S (1971-72) and Superbug L (1973-75) in Australia, and were similar to the European 1302S and 1303S models (names not used in Australia). From 1971, Super Beetle Cabriolets had a 15* prefix (not sold in Australia).

VW Type 14 chassis numbers are located on the frame tunnel, underneath the rear seat. These vehicles were only available in Australia from 1959 to 1968, fully imported from Germany. Only about 800 were sold in Australia due to their high cost. Since then numerous examples have been privately imported by enthusiasts.

VW Type 181 chassis numbers are located on the frame tunnel, underneath the rear seat. These vehicles were never offered for sale in Australia.

VW Type 3 chassis numbers are located on the frame tunnel, underneath the rear seat. VW Type 3 Sedans and Station Wagons were sold in Australia from February 1963, and apart from the first few months of sales, were Australian-made throughout. In 1965 the Fastback was introduced, fully imported from Germany. From 1968 the entire Type 3 range was locally assembled from German CKD kits. The Station Wagon had a â36*â chassis prefix. The imported Type 34 Karmann Ghia was only available to Australians from 1965 to 1968, and then only by special order. Its chassis prefix begins with â34â, and the third digit is the year. Less than 20 were sold here.

VW Type 4 chassis numbers are located underneath the rear seat, between the inner seat belt mounting points. The VW Type 4 was never sold in Australia.

VW K 70 chassis numbers are located in the engine bay. The VW K 70 was never sold in Australia.

VW Passat chassis numbers are located in the engine compartment on the front partition.  Passat sedans had a model prefix of â32â, while Variants (station wagons) used â33â. The chassis numbers below cover the range for both. The Passat was assembled in Australia from 1974-76 then fully imported from 1977-81.