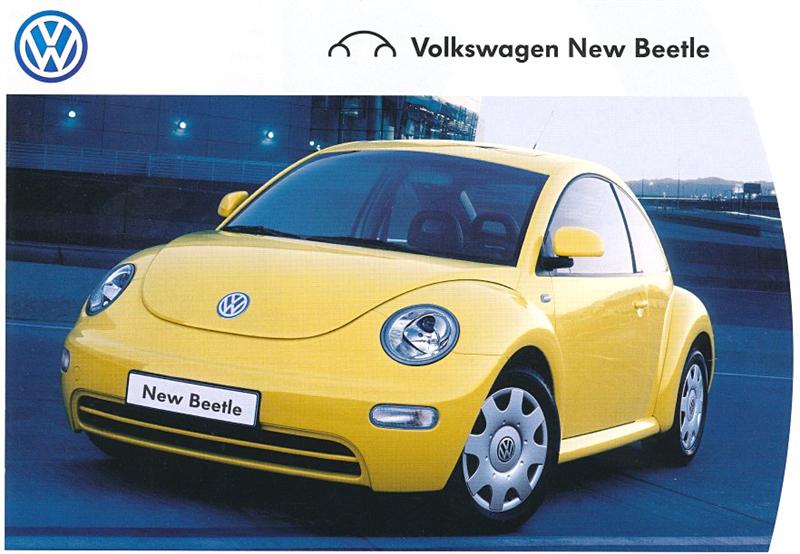 The New Beetle goes on sale, with an 85 kW 2.0-litre engine, for $34,690 for the 5-speed manual and another $2,000 for the 4-speed auto. It becomes the first Mexican-made Volkswagen to be sold in Australia. A âSunshineâ edition appears later in the year, with bright yellow paint, allow wheels, sunroof and different trim.

The updated Polo is released, with new nose and front bodywork, redesigned interior and more luxurious trim. Only the 16V version is available, with 55 kW 1.4-litre engine. It is priced at $22,490 for the manual, and $2,000 more for the 4-speed auto. 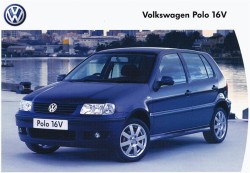 A limited edition âRallyâ version of the Golf is announced, in celebration of the Golf winning the Australian F2 Rally Championship in 1999. The Golf Rally has the 1.6-litre engine, 15â Amaroo alloy wheels, dark taillights and special badges. The normal GLE Golf has its expensive 20-valve 92 kW 2.0-litre engine replaced by the normal 16-valve 85 kW 2.0-litre shared with the Cabrio, Bora and New Beetle. The 20V engine continues on in the Passat.

A limited edition â20V Turbo Sportâ version of the Passat is announced. It has sports seats with leather upholstery, 16â Montreal alloy wheels and special badges, $4,000 worth of extras for $45,490, only $500 more than the Passat 20Vâs usual price. The Passat is awarded the NRMA Best Car Award for Best Luxury Car under $56,000.

The name â4Motionâ replaces âsyncroâ across the VWâs 4WD range worldwide, due to Steyr Daimler Puch losing the VW 4WD contract. All of VWâs future 4WDs will be designed in house and will carry the â4Motionâ name, regardless of the actual design. For Australia this only affects the Passat and Transporter/Caravelle. The Caravelle V6 is discontinued, with a 5-cylinder 75kW TDI option joining the 2.5-litre petrol engine.

A major announcement is made that the German Volkswagen AG parent company will take over selling VWs in Australia from Inchcape in January 2001. The VW parent company will be selling and servicing VWs directly, and will no longer operate through a third party.

VWâs car sales increase by 35% thanks to New Beetle fever and booming Golf sales. VW passes Mercedes Benz for the first time since 1977, but is passed by Kia and remains in 13th place. Inchcape has done a solid job of resuscitating VW from nothing, but now it was time for the next step.

2001
Volkswagen AG buys out Inchcapeâs Australian VW contract for $3 million, and takes over the importing, distributing and sales of Volkswagens in Australia, effective from 1 January. This is the first time that the Australian VW operation has been entirely VW-owned since 1967; a major step forward, but small potatoes compared to the $3.2 billion VW AG will invest in the Asia-Pacific region this year. The move ends the long and disjointed Australian history of Volkswagens being imported and sold by third parties. Inchcape would, however, continue to control VW parts and service for another 12 months.

A new VW AG-owned company, Volkswagen Group Australia Pty Ltd, is created, with former boss of VW Japan, Peter Nochar, appointed Managing Director. A new head office is established in temporary premises on Gardeners Rd at Mascot, Sydney, opened in May by Volkswagen AG Asia-Pacific president Dr Robert BÃ¼chelhofer. He told the press, âInchcape did a very good job, but an importer thinks in the short to medium term. We plan to bring in a long term approach.â 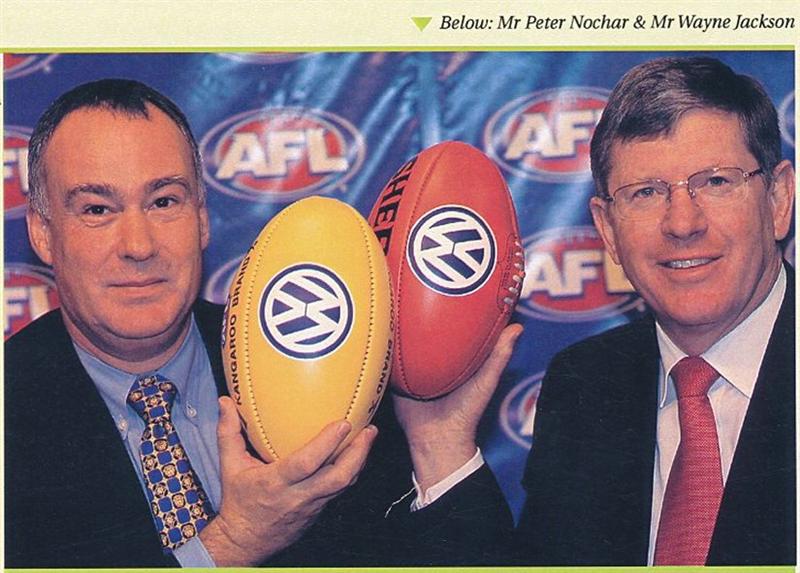 Volkswagen begins its first major sponsorship of sport in Australia, when they sign on as the ball sponsors for the AFL. The multi-million dollar sponsorship is for three years. The famous red Sherrin AFL balls now have VW logos on them.

The New Beetle Turbo is introduced as a limited edition model. It features a 110 kW 1.8-litre turbo engine, sports suspension, electronic rear spoiler and body kit. It is priced at $39,500 for the manual and $2,000 more for the 4-speed auto.

A new top-model Bora is released, the V6 Bora with 4Motion AWD. It comes with a 150 kW  2.8-litre narrow V6 engine, six-speed manual transmission and VWâs Electronic Stability Program (ESP) as standard, the first Australian Volkswagen fitted with it.

The Passat is upgraded to the so-called âB5.5â model, with the same basic body shell but with a redesigned nose, upgraded rear and new interior and trim. Sedan and wagon body styles are available, in 1.8-litre turbo, 2.8-litre V6 and V6 4Motion versions. The Passat again wins the NRMAâs Best Car Award for Best Luxury Car under $56,000.

Rod Penrose, driving his chop-roof turbocharged VW Beetle drag car, breaks a long-standing âHot VWsâ magazine âA Sedanâ world record at Heathcote Park Raceway in Bendigo Victoria. His Autocraft 2810cc turbo engine is boosted at 2.1 bar and produces 385 kW at the flywheel. After a few trial runs he runs an 8.96 sec at 155.87 mph (250.9 km/h) for the quarter mile. The fastest Volkswagen drag car in the world! Since then, however, the record has been recaptured by Ron Lumis in the USA. 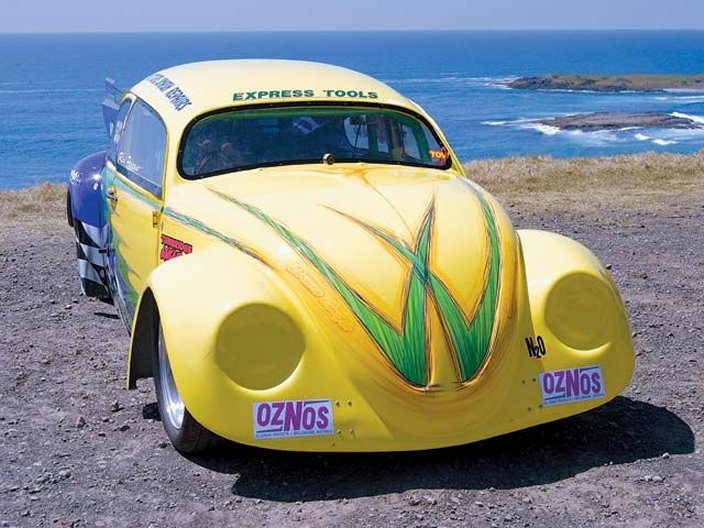 In the first year back under factory control, Volkswagen Group Australia sells over 10,000 VW vehicles annually, for the first time in 30 years. The 1976 sales record for the Golf is also broken. VW has moved up to 12th in Australian car sales, by passing Kia.

2002
Volkswagen Group Australia takes over VW parts and service support from Inchcape, ending all third-party control of VWâs Australian operations. Inchcape (Retail) continues some involvement in the VW business, as they own two of the Sydney Volkswagen dealers, Chatswood Classic Cars at Roseville and the Denlo Group at Parramatta. 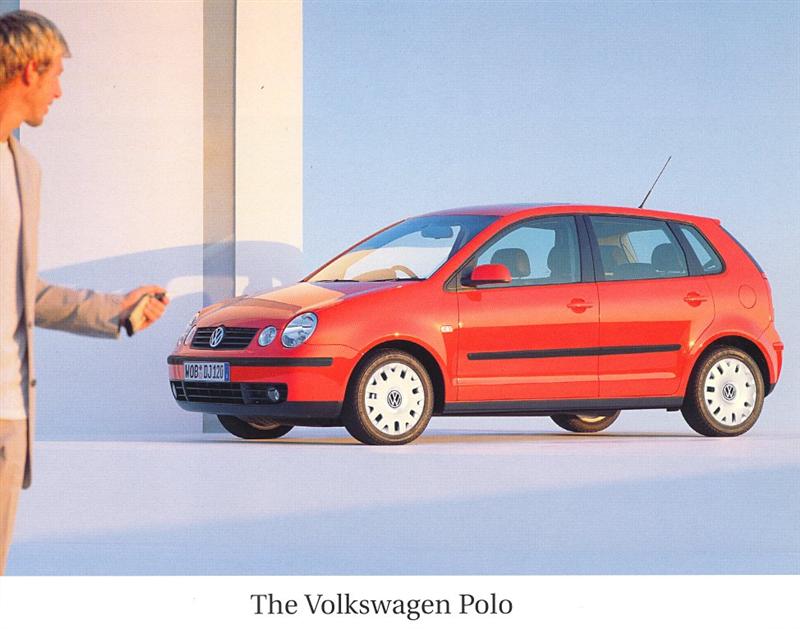 The all-new fourth-generation Polo is released, in four-door hatch form. Its body is larger than the old Mk3 Polo (and about the same size as the original Golf), and can be clearly recognised by its four round headlights. The range available is also greatly expanded. The base Polo comes in 3-door; the mid-range Polo S in three or five door, and the luxury Polo SE also in three or five doors, with the models having different equipment and trim levels. All Polos come with the 55 kW 1.4-litre engine, and choice of 5-speed manual or 4-speed auto.

The New Beetle range is revised, with a new lower-spec 75 kW 1.6-litre version priced at just $29,700 at the bottom. An 85 kW 2.0-litre version is available. Higher-spec luxury versions of both models are also available, called the Ikon. The 110 kW 1.8-litre New Beetle Turbo is the top local model, sharing its engine with the Golf GTI.

A 3.2-litre V6-powered left-hand-drive RSi Beetle is entered in the Targa Tasmania, driven by Paul Stokell. It goes well but crashes out on the second-last day. 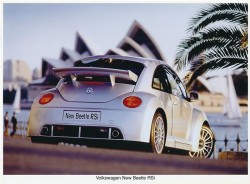 The Bora 2.0 shares its mechanicals and trim with the Golf SE. The Bora SPORT joins the range as a premium edition of the existing V5 and V6 4Motion models, with rear spoiler, new front grille, 17â alloy wheels, Michelin Sport tyres and special badges and trim.

A special limited edition Transporter, the TDI300, is released. It has a turbo-diesel engine and extra safety features, and retails for $33,690. A high-roof version of the Transporter is also released, with 7.8 cubic metres of load space.

VWâs local sales dip slightly to below 10,000 (for the last time, as it turns out). VW drops back to 14th place in the car market by being passed again by Kia and Mercedes Benz.

VW Group Australia sends out a press release â âThink Volkswagen, Think Beetle? Wrong.â The Golfâs cumulative production total of 21,517,415 has just passed that of the Beetle, making the Golf the most successful world-wide Volkswagen model ever. Australian VW boss Peter Nochar comments, âThe Golf is our single most important model, and maybe in future when people think Volkswagen, they will think Golf first and Beetle second.â

The Mexican-made New Beetle Cabriolet is released, with a 13-second electrically powered roof and a 110 kW 2.0-litre engine. The old âMk3Â½â Golf Cabriolet is discontinued. The standard New Beetle 1.6 and 2.0-litre models are discontinued, with only the Ikon trim versions still available, together with the Turbo. 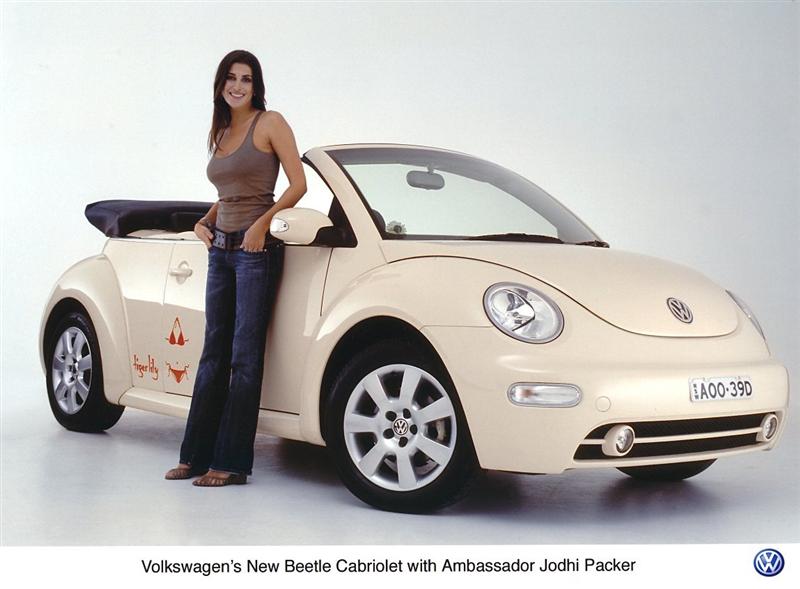 A special version of the Golf, called the Generation, is released to celebrate Volkswagenâs 50 years in Australia. Available with 1.6 or 2.0-litre engine and a host of extras, the Generation starts at $26,490 drive-away.

The limited-edition Passat W8 is released, with a 202 kW 4.0-litre 8-cylinder engine. It becomes the first Volkswagen sold in Australia to be electronically limited to a top speed of 250 km/h (as if that matters on our 110 km/h motorways).

The Touareg large SUV is released, becoming the first Volkswagen SUV, and the first Slovakian-made Volkswagen, to be sold in Australia. It is available in V6 and V6 Luxury, V8 and V10 TDI versions. Prices begin at $67,600 for the V6, up to $138,500 for the V10 TDI. The Touareg V8 wins Overlander Magazineâs 4WD of the year award. VW Australia appoints former rugby legend Phil Kearns to promote the Touareg.

Local VW ads for the Touareg proclaim, âCome to think of it, announcing our first-ever 4x4.â Unfortunately this is wrong. VWâs previous 4x4s go back to the Schwimmwagens and Kommandeurwagens of WW2. More recently, other VW 4x4s have included the Iltis, the Passat Tetra, the previous range of Syncro Transporters, Golfs and Passats, and all the current range of 4Motion 4x4 AWD vehicles. The Touareg is actually VWâs first 'luxury SUV'. 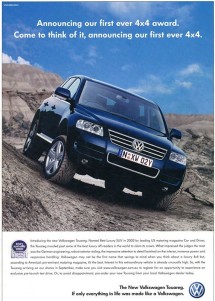 VW regains lost ground as the new VW Group Australia stabilises, and overall sales grow by 25%. VW passes BMW (for the first time since 1980) and also Daewoo, to move back up to 12th place in the local car market.

The 500,000th Australian Volkswagen is sold in March, but sadly no official ceremony marks the occasion and it passes unnoticed. What an opportunity for celebration missed!

The first issue of the independent bi-monthly âVW Magazine Australiaâ, edited and published by Craig Hughes in QLD, goes on sale in newsagents. Its website is www.vwma.net.au

The Polo range is revised, with the 3-door Polo Club, 5-door Polo Match and 5-door Polo Elite now available, with different levels of equipment, from $19,990. The Polo Classic, the booted version of the Polo, is introduced for the first time, with the same 74 kW 1.6-litre engine as the hatchbacks. The Polo Classic is the first Chinese-made car (of any make) to be sold in Australia. 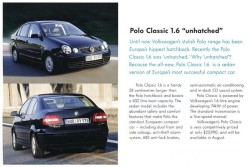 A pearl-effect âBlack Magicâ colour version of the New Beetle Cabrio is added to the range. It sells for $46,990.

The latest fifth generation of the Golf is released in Australia, with the Golf 5 now being sourced from VWâs Uitenhage plant in South Africa rather than Germany. The trim and equipment range of the Golf 5 is also revised. Bringing the Australian range into line with the rest of the world, the Golf 5 is now available in Trendline, Comfortline and Sportline versions. Engines choices are 1.6-litre, 2.0-litre FSI, 1.9-litre TDI and 2.0-litre TDI. The Golf range begins at $25,490. 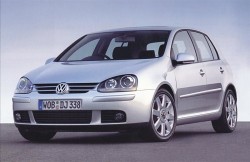 The most powerful production Golf so far, the 177 kW 3.2-litre V6 Golf R32, goes on sale in Australia for the first time, in very limited numbers (itâs still the Golf 4 version). Just 200 examples are imported.

The low-spec Passat 1.8 turbo is discontinued, and replaced with a 125 kW 2.5-litre V5 version, the same engine as the V5 Bora. The 142 kW 2.8-litre V6 Passat continues. The exclusive Passat W8 is discontinued, proving itself too expensive for the Australian market.

The Caddy range of small delivery vans is released in Australia for the first time. It is available with a choice of two engines â the 75 kW 1.6 petrol, or 77 kW 1.9-litre TDI. 5-speed manual transmissions are standard. The Caddy is the first Polish-made Volkswagen to be sold in Australia. 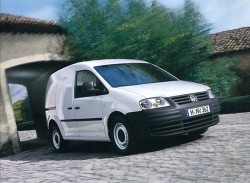 Matching the T5 Transporter is the T5 passenger range. The 96 kW 2.8-litre TDI is standard on the Kombi and Caravelle, and the 128 kW 2.5-litre TDI is standad on the Multivan. Buyers can choose from a 6-speed manual or 6-speed auto transmission.

Cab-Chassis versions of the LT are added the range, in both short and long wheelbase versions, with the same engine choices as the vans.

In spite of the popular new Caddy and T5, VWâs passenger car sales dip by 22.8% and VW is re-passed by BMW, slipping to 13th place in the local car market.